The Road Ahead for Libraries in 2019

The Road Ahead for Libraries in 2019 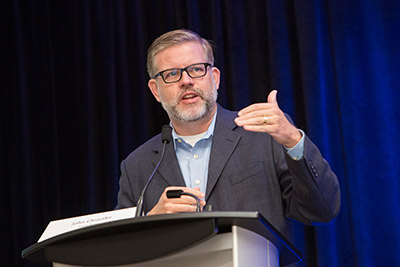 At my own hometown library in Berwyn, IL., 93% of the funding that runs our library comes from just one Zip Code: 60402. If we add in the state “per capita” aid, grants that come through, and donations, the local contribution was as high as 96% or 97%. Federal funding has always been indirect and largely seen through important services like Interlibrary Loan and other supports for resource sharing. I know from the national library data that this is the situation all over the country.

As we look ahead to the 2019 climate for libraries, I want to remind us all of the fact that the local and state funding drives the success of our public libraries. In almost every state, Zip Code-level funding accounts for over 90% of library budgets. In each and every state, that number is no less than 90% when state aid is brought in. The forecast for libraries starts and ends with a very local set of concerns. To be successful in 2019 and beyond, library leaders need to pay close attention to what is happening in their state houses, city halls, county seats, and school boards.

Like 6 out of 10 public libraries in the United States, my hometown library is a department of our municipal government, in this case the City of Berwyn. From 2005 to 2013 I had the honor and responsibility of serving on the library board of trustees. Along with my fellow trustees, we paid a lot of attention to the budget and bills in Springfield and we followed the library advocacy news out of Washington, D.C. But it wasn’t until we hit a funding crisis during the 2009 and 2010 downturn that we realized just how important the local political, economic, and social climate was to the future of our library’s funding. While there was trouble nationally and austerity in the state house, we should have been keeping our keenest eye on what was happening to our neighbors’ jobs, to the housing market, to tax receipts at City Hall, and in our schools.

Yes, the situation in Washington D.C. in early 2019 is divided and uncertain for libraries. As of this writing, the federal government is in Week 3 of the 2018-2019 partial shutdown. We are going to be living with a hyper-divided Congress and the dysfunctional political climate in D.C. for the foreseeable future. The stated policy of the Trump Administration is to either diminish or dismantle much of the federal government’s funding, regulatory, and rulemaking role. We do not know yet, but here at EveryLibrary we suspect that the President’s FY2020 budget will again call for the complete defunding of the federal Institute of Museum and Library Services. Our SaveIMLS.org [http://saveimls.org] campaign helped rally Americans against this terrible idea in 2017 and 2018, and we are prepared to do it again in 2019. But the vast majority of direct funding for public libraries isn’t coming from Washington. It’s coming from your local community as either property taxes or sales/use taxes.

It is true when I say that at the state level, the government is less divided (on a state-by-state basis) than in D.C. However, that is a false positive. Following the 2018 Midterms, America has exactly one state House and Senate (in Minnesota) that is split between Republicans and Democrats. (Nebraska is a unicameral legislature, so it does not count.) According to the National Conference of State Legislatures [http://www.ncsl.org/research/elections-and-campaigns/statevote-2018-state-legislative-races-and-ballot-measures.aspx] the remaining 48 states are either all Republican or all Democrat in both chambers. Only 13 states have divided legislative and executive powers. Post Midterms, Republicans hold the House, Senate, and the Governor’s Mansion in 22 states. Democrats control the other 15 states. Whether you are a supporter of your own current state government’s party platform or not, in 2019 single-party rule means that it is vital for library leaders to understand the political and budgetary priorities of the party in power. And if the single party in power’s political philosophy does not include libraries or library funding, then asking to increase state aid, funding for the state library agency, or any new appropriations are going to be very difficult.

Likewise, in many states, tax caps and tax rollbacks remain a negative force on library budgets. The majority to public library campaigns we worked on last year attempted to override a tax caps like the Headley Amendment in Michigan, TABOR or Gallagher in Colorado, the Hancock Amendment in Missouri, the “2% Cap” in New York, and Proposition 13 in California. These tax caps and rollbacks regularly force libraries (as units of local government) to pass an override ballot measure or else face automatic budget cuts. This will not change in 2019 unless specific exemptions are carved out for libraries in state law, or the political climate about taxes changes. Tax Caps are wildly popular among anti-tax and anti-government groups.

In fact, tax caps and rollback are becoming even more popular. On the 2018 Midterms, North Carolina voters approved an Income Tax Cap Amendment that lowers the maximum state income tax rate from 10% to 7% [https://wlos.com/news/election/nc-voters-reject-amendments-to-increase-legislators-say-over-elections-board-makeup]. Florida narrowly avoided a massive and potentially devastating new Homestead Exemption cap when Constitutional Amendment 1 failed to reach 60% [https://www.miamiherald.com/news/politics-government/election/article220679075.html]. In Indiana, voters approved Public Question 1 to require the state to adopt a balanced budget each year [https://www.indystar.com/story/news/politics/elections/2018/11/06/indiana-election-2018-balanced-budget-amendment-public-question-ballot-passes/1808887002/]. On the surface, a balanced budget may sound like good government. But if a state is Constitutionally prohibited from deficit spending, measures like Public Question 1 will instead shrink government – including libraries – during a budget crisis. And that’s exactly when taxpayers need library resources and services the most.

On the local level, there is another kind of tax cap or rollback for library leaders to look out for in 2019. There is a growing trend for big box retailers to use a so-called “dark store” tax exemption to lower their property taxes [https://www.citylab.com/equity/2018/11/property-tax-dark-store-theory-retail-apocalypse-walmart/574123/]. This exemption is intended to help retailers and property owners when a store is closed or vacant. However, these “big box” retailers are using a variety of loopholes and accounting tricks to claim “dark store” exemptions on stores that are open for business. This is a huge potential hit to the local tax base and therefore to library (and school district) funding. The advocacy team at Michigan Library Association has been working on this problem in a coalition [https://www.michigantownships.org/press_releases.asp?tpt=nv&nid=1126] for several years there. Library leaders across the country need to follow their coalition-focused example. If this is allowed to happen during relatively good economic times, the next recession will be even worse for local library funding when stores are truly closing.

In 2019, library leaders must step up their game and talk about the legitimate, taxpayer-funded role public libraries have in education, community development, economic growth, and livability. Both sides of the political narrative need to hear from library leaders about what a small amount of smart tax money does to create more interesting, thriving, and prosperous places. Otherwise, in the midst of all the national angst about where this country is headed – and how it is governed – the funding we need will pass us by.

Here at EveryLibrary, we know that library elections are as much about the value system of the local community as it is about what is on the ballot [http://everylibrary.org/concerned-2018-library-ballot-measure-results/]. Voters want to know who is spending those taxes. Voter trust and believe librarians, so they need to hear from you directly about what their taxes do for the community. Likewise, voters across the country said time and again during the Midterms that they wanted to “hear both sides of an issue” and to learn about the candidates as people. In 2016, PEW’s “Libraries” study [http://www.pewinternet.org/2016/09/09/libraries-2016/] very clearly showed that the majority of Americans trust – and look to – libraries as a source for civic discourse, the free exchange of ideas, no-barrier participation in democracy, and as an antidote to Fake News.

In 2019, library leaders need to do three important things to help Americans talk with each other about what kind of America we want. We would like to see libraries deepen their programming around civic issues, civic literacy, and political engagement this year. We believe strongly that libraries should create and support partnerships focused on non-partisan voter registration activities, voter enfranchisement, ballot access, and polling places accessibility. And we believe that inclusive, participatory planning and not just telling stories about patrons is the key to future success. In 2019, America needs their librarians to lead the way in bringing diverse voices to support at least one key civic issue: their libraries.